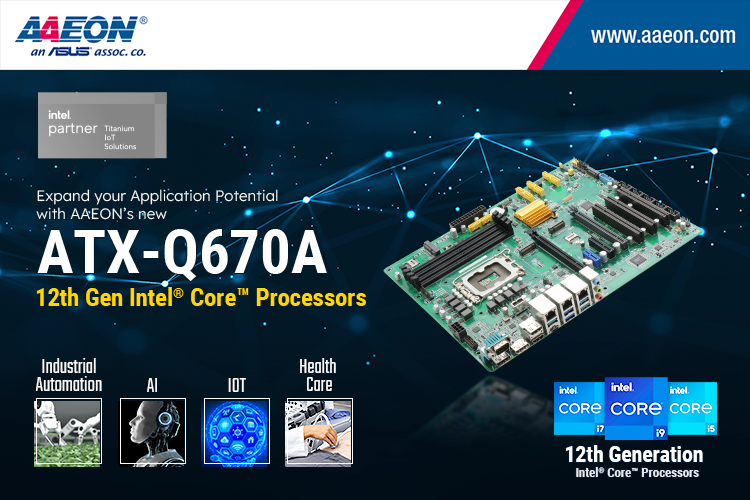 The ATX-Q670A represents a breakthrough in ATX motherboard technology, being the first of its kind to support DDR5, offering a 50% increase in bandwidth and 20% decrease in power consumption. Additionally, the ATX-Q670A boasts an elite storage architecture, featuring eight SATA III (6.0 Gbps) ports, double its nearest competitor; along with two M.2 M-Keys.

Consequently, the ATX-Q670A offers the perfect foundation for IoT applications, with a combination of the highest maximum SATA performance and the very fastest SSD. These improvements correlate to higher I/O speeds and data rates, which are imperative given the growing demands of smart industry applications under the IoT umbrella.

Powered by the latest Intel 12th Generation Core Processors, such a wealth of expansion options pair with an impressive I/O to give the ATX-Q670A the power and precision needed for sophisticated industrial automation applications.

Improvements in I/O speeds and data rates have the capacity to process a greater volume of data for a wider variety of applications. Therefore, the ATX-Q670A is equipped with more stringent, reliable security features.

A bootable USB feature protects a rich rear I/O comprised of three USB 3.2 Gen 2 and two USB 3.2 Gen 1 ports, along with one USB Type-C port. This can prevent bootable programs from accessing your system via a USB device.

With enhanced security, applications which require the handling of more sensitive data, such as those in the healthcare industry, are better protected while still benefiting from the ATX-Q670A’s excellent connectivity.