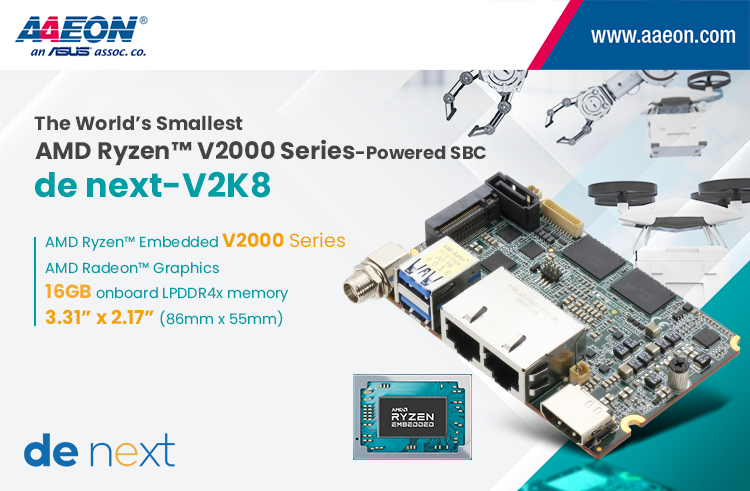 Making it two in a row, AAEON’s de next range of SBCs has once again produced the world’s smallest single board computer incorporating a next generation processor series. Measuring just 3.31” x 2.17” (86mm x 55mm), the de next-V2K8 is equipped with AMD Ryzen™ Embedded V2000 Series Processors, integrated AMD Radeon™ Graphics, and 16GB onboard LPDDR4x memory. To provide customers with the best possible route to harness this industrial-level platform, the de next-V2K8 possesses a full-function I/O with multiple high-speed interfaces, producing the next generation of SBC for edge AI, drone, robotics, and transportation applications.

Powered by the AMD Ryzen™ Embedded V2718 and V2516 processors, the de next-V2K8 boasts an astonishing 8 cores and 16 threads alongside Zen 2 x86 core architecture and 7nm process technology in an unprecedentedly small board. Taking advantage of this strong base, the de next-V2K8 has the next generation of high-performance computing for edge AI applications along with the mobility for deployment in robotics solutions.

Configured to make the most of its integrated AMD Radeon™ Graphics, the de next-V2K8 is designed with utility and sophistication in mind. Hosting eDP and HDMI 1.4b ports for 4K @30Hz, the de next-V2K8 can produce two simultaneous displays. In addition to this, its 2.5 GbE port, dual RS232/422/485 pin headers, and total of six USB ensure connectivity with a broad range of peripheral cameras and sensors.

The de next-V2K8’s miniature form factor, exceptional processing power, and light weight ensure it is suitable for a wealth of vertical market environments in which utility in deployment is paramount, including drone and smart transport solutions. Armed with 16GB of onboard LPDDR4x and high-speed I/O features capable of channeling its industrial-grade power, the de next-V2K8 provides customers with both speed and performance in a board small enough for even the most restrictive deployment spaces.